Jesse Hickok is a below the knee amputee resulting from complications following an accident – specifically a fall from 13 feet. In the aftermath of his fall, the doctors in McKinney advised Jesse to have the lower portion of his left leg removed, as it would be a constant source pain and discomfort.  It would never be the leg he wanted again. He prayed about this decision and ultimately had his left leg amputated below the knee. 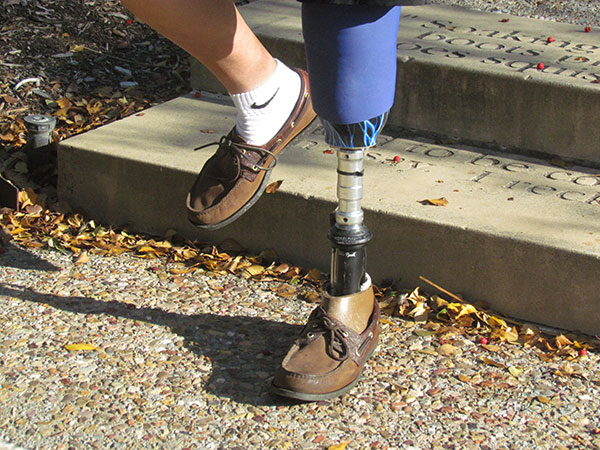 The amputation of his left leg occurred almost 8 years ago. Following the amputation, Jesse was fitted with his first prosthetic leg by the Veterans Administration. According to Jesse, the prosthetic provided by the VA was little more than a “prehistoric stump”. It hurt all the time, he had to remove it frequently, and he had constant problems with it fitting properly. Jesse knew there must be a better option, so he sought help from APR to fit him with a new prosthetic leg.

Jesse had particular praise for Jan Morgan at APR. When he calls Jan for any reason, Jesse noted that Jan always gets to him as quickly as he can. Jesse also mentioned the other professionals as Advanced Prosthetic Research – how friendly and eager they all were to help him.

Jesse specifically noted how tight and securely this prosthetic leg fits – that once the air is pushed out, the leg is very secure and will not slip or come off. He also noted that he never has to remove it because of discomfort.

Jesse could not be more pleased with the prosthesis provided by APR. He has no limitations and lives life to the fullest. While he doesn’t normally have to see the personnel at APR often, he mentioned how quick the staff is to help him if he does have any issues. Jesse highly recommends anyone in a similar circumstance consider contacting the professionals at Advanced Prosthetic Research.