Jose Diaz is a left leg below the knee amputee resulting from complications from diabetes. Following the amputation of his left leg, his surgeon recommended the team at APR to fit him with his new prosthetic leg.

Since his amputation in December of 2011, Jose has devoted his time and his life to visiting and encouraging other amputees. In his visits, Jose has witnessed the horror stories that have resulted when amputees have used other prosthetic companies. Jose said that “it pains him to see what other people go through just because other companies don’t have the level of expertise and service that APR does”. Jose is often asked to visit amputees who may be in need of motivation following their own amputation. Jose said his prosthetic leg fits his needs perfectly and that he’s never had any issues with it. 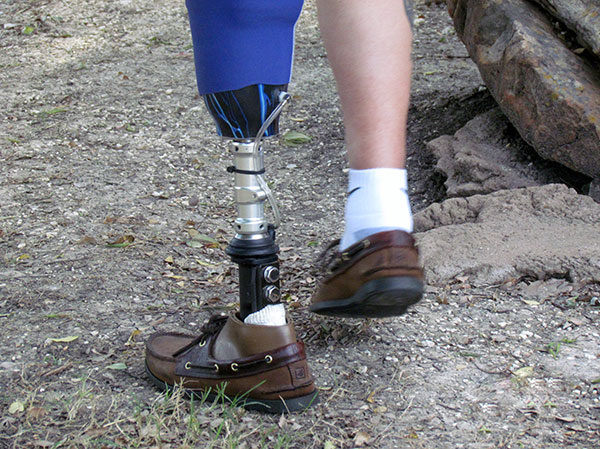 The first year following his leg amputation and fitting of his prosthetic leg, APR visited him numerous times to ensure everything was correct and fit just perfectly.

Prior to his amputation, Jose had a very sedentary job, and as a result was overweight with diabetes. During his recovery and going through physical therapy, Jose lost over 100 pounds. His diabetes is now under control due to his weight loss. Jose has no limitations and enjoys life to the fullest, and quickly tells people that his quality of life has improved.

Jose says that he can do just about anything he wants to. He cited examples of riding a mechanical bull, to riding a bicycle, to walking.

The main reasons Jose visits amputees in hospitals now is due to his own personal experience. When he was laid up in the hospital following his own amputation, nobody visited him, and it was hard to deal with the depression that settled in. Jose does not want other amputees to experience this same thing or to go through what he experienced.

Being Hispanic and bilingual, Jose believes he can especially help other Spanish speaking patients and amputees. Most amputees in the hospital are very scared – the unknown is the worst part – and Jose can help them as they struggle with these issues.

Jose always advises people he visits that if you’re happy with your prosthetic company, by all means stay with them, but if you’re not, he is quick to refer people to APR, because the level of confidence you have with these people is extremely important!

Through his work with the Dallas Amputee Network, Jose met his finance Olivia, who is also a left below the knee amputee. Both Jose and Olivia proudly promote the advantages of using APR.